Wednesday for the Win

I woke up Wednesday morning at 6:45am because I had an audition for Dallas Opera (a company I performed with last season) at 10:50am. No, I don't need 4 hours to get ready--how high maintenance do you think I AM?? However, I need to be awake at least four hours before I have to present myself in an audition. I don't love auditioning that early, but the positive that I've found in forcing myself out of bed earlier than normal is in the hour before I shower and start really getting ready: I drink my coffee while quietly meditating and piddling around on the internet.

I've also found comfort in the habit of warming up every day. During weeks like this, I know it only takes 15-20 minutes (I should actually time it out) of vocalizing to feel warmed up and ready to sing. I've also discovered that my *favorite* way to vocalize is in small stages: sing a few, apply my make-up, sing a couple more, check Facebook, sing one that I don't do every day, maybe an aria or an excerpt of the role I'm learning...etc, etc.

Well, whatever I did yesterday morning worked because my audition went really well! Afterwards, I had a few hours to kill (aka, eat lunch, look at music, try not to loose momentum, warmup again) before I had my first cover stagings at the Met. Somewhere in the middle of Law andOrder SVUon Hulu (you've got a better way to quietly kill 45 minutes?) I get the kind of email that every opera singer loves to get--a job inquiry! An opera company is looking for a role replacement for an production at the end of April. My manager and I are happy to accept and patiently awaiting the confirmation. Of course, if it all works out I'll have to jumble a few things around. This is the upside / downside to the uncertain lifestyle of an opera singer. The downsideis that you sometimes never know when your next job opportunity is going to present itself and it can be hard to plan in advance; the upsideis that I do something I love for a career and when I'm not working I often have free time to spend with the people I love.

Speaking of people I love...the pièce de résistanceto my crazy day yesterday came when I arrived home after rehearsal. The back story: I had purchased a comically terriblebottle of red wine by accidentthat we opened last Friday, but couldn't drink--moral of the story is I will never again spend 7 dollars on wine that has printed "Nutritional Facts" and a list of ingredients with sugar and water being the first two listed. Didn't see that until I got home--Friday Night Fail. Chef Paul has been 100% Pescetarianfor almost a year and for the last week or so he's been toying around with the idea of adding meat gradually back into his diet. I hate wasting food and we were brainstorming ideas for the wine--sangria, spaghetti sauce, a red wine reduction--but I had to dash off to rehearsal. Via text on the walk home CP had already alerted me that dinner was in the oven and I smelled rosemary the minute I walked into the apartment. What I didn't expect to see was a Fred Flintstones-sized pot roast with all the root vegetable trimmings bubbling away!! 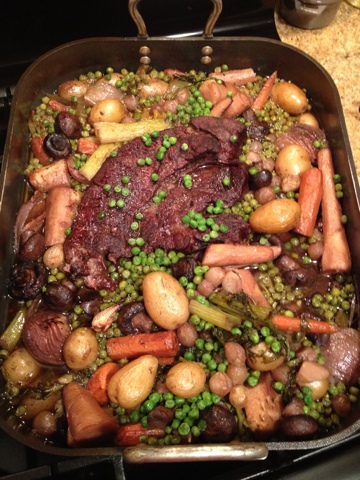 This article originated from a feed.