Home Is Where My Heart Is (for the time being)

The operatic career is all about scheduling your life--the Who, What, When, Where and then the How (and sometimes the WHY am I doing this??) come much later. Some contracts are secured many years in advance, some just over a year, some just a couple of months and (to really make life interesting) some just a couple of weeks or days. Always sentimental to me is when a gig finally comes around that I've known about for some time. It makes me reflect on the passage of time and everything that's changed in my life since the time I first learned of the gig to the present moment. One of Chef Paul and I's favorite sayings is: "you can't read the future." Easier said than done, it requires a positive, flexible attitude and a desire to continually be up for a challenge. And so, sometimes one can get caught up in this lifestyle and forget all about the blog you started a year ago. Excuse moi!
In the spririt of reflection, let's go back a few months. In my last blog post I was gearing up for the fall: Parsifalat Lyric Opera of Chicago. I had an amazing experience being back at Lyric, making new friends/colleagues singing in my first Wagner opera (who knew this soubrette soprano could wear the breast-plate and the horns?) and living the commuter's life taking the Chicago Metra to and from work from my in-law's house in the suburbs. It was a busy, beautiful, cold, puppy-filled two months.
December was back to NYC. I sang 7 auditions during the fall audition season and spent my time preparing for my next two gigs which were both in New Orleans. First, were the soprano solos in Handel'sDixit Dominusand Vivaldi's Magnificatwhich were the week before Christmas . I was happy to have a week in NOLA to sing and spend time with family and friends for the holidays, but I was able to jet back to NYC to celebrate backstage at the Met on Christmas Eve while Chef Paul performed in TheMagicFlute. Holding my husband's hand as we walked to and from the Met and then coming home to FaceTime with our families as we opened presents was a very fitting way to celebrate our first Christmas as a married couple.
Here's a chocolate cake we made for New Year's Eve.... 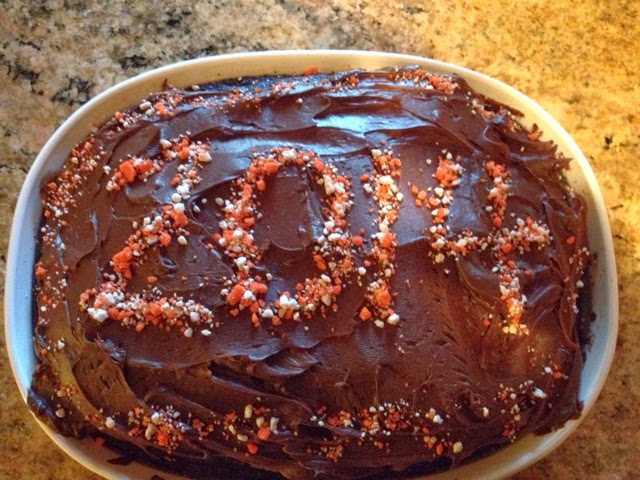 The next gig brings us back up to date: singing one of Cinderella's Stepsisters in Cendrillonwith the New Orleans Opera. Whether my role is large or small, I'm thrilled anytime I get to work with the opera company in my hometown. I've sung six roles here ranging from my first professional operatic role, TheSlavein Salome(one line only) to Oscarin Un Ballo in Mascherawhere I sang the principal role of the young page! I'm living at home with my parents (and one very sensitive cat) and have enjoyed the unique experience of being on a gig that doesn't feel like a gig because I come home to my family! Actually, between being in Chicago, NYC and NOLA one could say I had the pleasure of always living at "home" this season.
And when we're not working, as usual we've been cooking up a storm. CP and I take turns making breakfast in the morning and although he usually takes the lead in the kitchen (I've become very good at sitting back while he cooks and then I clean the kitchen) I've also had my fair share of winning dishes. When I lived with my mother-in-law this fall I was treated to her wonderful cooking everyday and I enjoyed bringing home a winter squash or a rotisserie chicken for us to share and seeing what she would create with the leftovers--hint: delicious chicken salad and the best chicken soup you can imagine. Since I've been in New Orleans, my mother gets a tiny break from cooking while I get to show off some of what I've learned in the kitchen. So far I've made chicken tacos, spaghetti and meatballs, meatloaf, lots of roasted veggies and several kinds of soups.
Happy Belated New Year and First Anniversary to Arias and Artichokes!

This article originated from a feed.