Thursday, December 3, 2015 was a really REALLY good day. I am well aware that it was almost two months ago and 2015 is sooooo last year, but this Blog is about my musical and culinary adventures and, on that day, I had quite an adventure.

I'll start by a quick update: my Fall opera contract was understudying the role of Valenciennein TheMerryWidowat Lyric Opera of Chicago. I really enjoyed being part of the rehearsal process as it was a remount of the Metropolitan Opera's production. It was directed and choreographed by Tony Award Winner, Susan Stromanand she was scheduled to be in Chicago for nearly the entire rehearsal period. Cool, right? Important fact: Susan Stroman is neighbors with my most favorite Barefoot Contessaand she's appeared on more than one episode with Ina Garten and friends.

She's eaten Ina's food...and cooked with her....they're friends...Ina calls her "Stro".
I felt closer to Ina just being in the same room as Susan Stroman.
After a month of rehearsals for both the principal cast and the understudies, the show opened in mid-November and had a run of 10 performances. I felt really good about my understudy rehearsals. TheMerry Widowis an Operettawhich means there are spoken dialogue scenes in between the musical "numbers" with lots of dancing. This makes the show feel much more like musical theater than opera, but the vocal writing requires an operatic voice. And, of course, there's the fact that the singing is performed without microphones in an auditorium with over 3500 seats.
I was mostly concerned that as the understudy for ValencienneI would be asked to learn a series of dancing lifts that my character did in Act 3 with the help of the four male dancers. Valencienne"performs" with the dancing Grisettes at the beginning of Act 3. In previous experiences I've done some simple lifts, but never anything quite as advanced as the choreography in this show. Just to give you an idea of my concern: one lift involved being turned upside down, one was a cartwheel while holding onto a dancer's legs (huh?) and one involved tossing me between the four men like a sack of potatoes.

I had a sufficient amount of rehearsals and I felt moderately comfortable with the lifts...you know, in the off-chance that I would go on in the show....
Do you see where this is going?

On December 3rd there was a 2pm matinee performance and I woke up bright and early because it was my Birthday! I had big plans to perhaps treat myself to a Birthday lunch, manicure, maybe even some shopping. I was running on an unusually early schedule that day and it was only 9:30am when I got out of the shower and grabbed my phone (probably to check Facebook birthday posts) and saw a missed call and voicemail from the opera house. It was THE CALL. The wonderful singer who I was covering was sick and had sadly canceled. I was going to be performing for the matinee!

There is not an appropriate word to correctly describe the mixed emotions that I felt. Intense excitement, nerves, disbelief, gratefulness and, believe or not, calmness? I felt deep down that this was a very significant birthday gift. I only needed to trustthat I was going to do my very best. 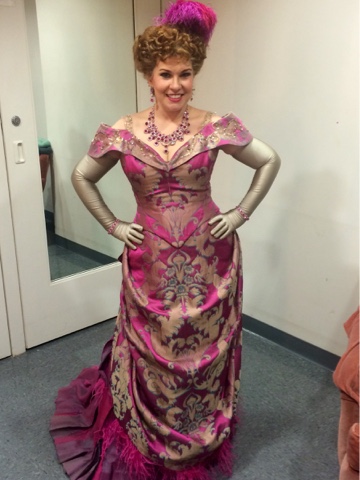 Everything that afternoon went wonderful--from the last minute wig fitting, costume fitting(s), microphone check (for the dialogue), warming up and hearing words of excitement and encouragement from every person I came in contact with. What more could I ask for?

You've heard of Soprano RenéeFleming, right? I've heard of her for almost 20 years. Hers was one of the first operatic voices that I'd listened to on recording when my voice teacher gave me my first operatic CD as a high school graduation present. She's easily the most well-known opera singer of her generation. Lucky for me, she was also singing the title role in Chicago's production of Widow.
I was arguably more excited about meeting her for the very first time (because I hadn't yet) AND singing the supporting lead soprano role opposite her than I was about anything else. I have described moments of being onstage with her as being "out of body". It was like I was watching myself sing with her from somewhere up above. She even wished me "Happy Birthday" in the wings when we came offstage! 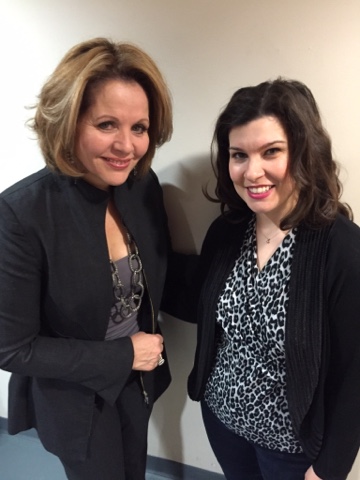 The only thing that could have made this birthday "merrier" is if my parents and Chef Paul could have been there!
For my next Birthday I would like to meet Ina.