I just finished a truly remarkable few weeks singing with Opera Santa Barbara in their production of Donizetti's The Elixir of Love. "Elixir" is significant to me because it was one of my first operatic experiences: in my sophomore year of college I was double cast as Giannetta--the smaller of the two soprano roles in the opera. Until that point, my performances had only been in musical theater and straight plays. The process of being in opera was similar, but different enough that I developed a mild love/hate relationship with the idea of being an opera singer.
Somewhere along the way, though, I warmed up to the idea, because just under a decade later I was a working opera singer in my second year in the Ryan Opera Center at Lyric Opera of Chicago and was cast once again (this time sung in Italian) as Giannetta. Ten years later, I had a lot of fun with the experience and felt more like a confident singer.
Fast forward to the present: for Opera Santa Barbara I sang the larger of the two Soprano roles: Adina. As with any other role debut the experience marks a significant milestone in my career. After the opening night performance I felt similar to how I felt the time I sang Susannain The Marriage of Figaro. I felt like I'd just been inducted into a very exclusive society of sopranos who sing that role. It was a very good feeling! 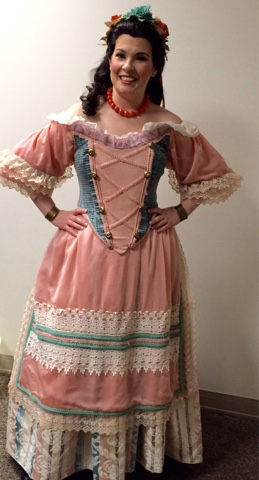 Backstage in my Act 1 Costume
But as with so many other milestones, along the way there was doubt: "How does one do this? How will I maneuver these rehearsals? Will I figure out the pacing? What will it feel like on stage with orchestra?"
Doubt and all of it's relatives: fear, worry and anxiety are feelings that all artists (and humans) deal with and, fortunately, I've found ways to silence the negativity. But when they are at the forefront of your mind they take so much of the JOY out of the experience. Performing onstage, after all, is all about being 100% focused, 100% courageous and 100% confident. It helps, of course, if you are 100% prepared! The end result is exciting, liberating and empowering!
After the opening night performance, I attended an after party at the theater and saw a service dog in the room. She had attended the two and a half hour opera with her owner--who says opera isn't for everyone? I asked to have my picture taken :-) 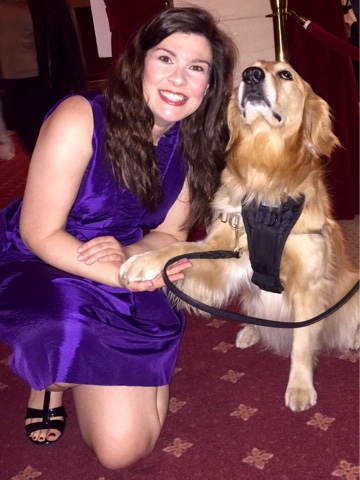 Anyone who knows me knows how crazy I am about dogs and cats—obsessed is the more appropriate word. Anyone who remembers me from the first 20+ years of my life will recall that I was PETRIFIED of dogs. I wasn't keen on cats either until my parents got me a cat when I was 8 years old in an effort to help me with this fear. It took a few days for me to allow them to let the cat out of the laundry room, but soon my heart was wrapped around its furry paw.
The dog fear lasted into early adulthood and somehow after a few forced brave encounters with dogs I literally "grew" out of that phase. With my dog fear behind me, Chef Paul (in the very early stages of our courtship) acquired a dog from another opera colleague and it was love at first sight. We love Colby!
As I look at this picture of my post performance GLOW with a big, friendly paw in my hand I can't help but reflect on the milestone of overcoming fears. Fears that are completely brought on not by some catastrophic event, but by self-doubt and situations that you can't control.
What a waste of precious energy that could be spent enjoying the process and living in the moment! Now that Elixir is behind me I am nothing but grateful: for all that I learned from the experience, from the enormous boost of confidence a successful performance leaves you with and for the artistic connections made with new and old colleagues.
As far as emotions go, I know I need to take it one day at a time--sometimes one moment at a time. With age and experience come so much wisdom in every aspect of my life. Among countless other things, this experience reminded me of two things I know for sure:
I love the thrill of performing and I also love dogs!